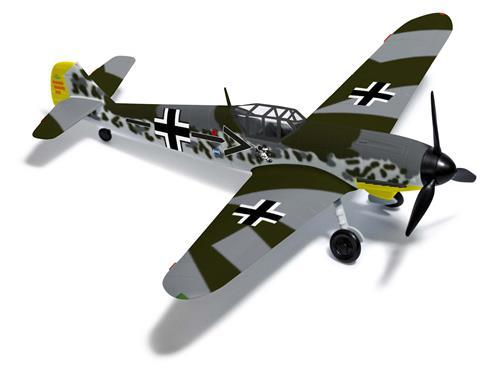 Born on 19 March 1912 in Westerholt / Westphalia Adolf Galland has been interested in aviation since his youth. Thus, the hitherto enthusiastic glider pilot joined the officially non-existent Luftwaffe in 1932. First, he participated in the secret training in Italy in 1933 and was promoted to lieutenant in 1934. During a Spanish Civil War in 1937, Lieutenant Galland was able to gain first experience in the "Legion Condor", he was also honored for his use there with the Spanish Cross with swords in gold with diamonds. During the Polish campaign he was awarded the Iron Cross 1st class and a short time later during the Western campaign on 12.05.1940 the Knight's Cross to the Iron Cross. Only a few weeks later on 6 June 1940 Galland was commander of the III. Group of Jagdgeschwader 26 "Schlageter" and on 22 August the then 28-year-old took over the command of the squadron as a major. For his 40th victory on 24th September this year, he was awarded Oak Leaves Knight's Cross. Although Galland was shot down and wounded in St. Omer in June 1941, he was able to announce his 70th victory in the same month and received the then highest prowess of honor, the swords to the Knight's Cross with oak leaves. On January 28, 1942, he received after heavy missions on the canal front diamonds to the Knight's Cross with oak leaves and swords and a promotion to colonel - so he had to accept, however, also an enemy flight ban. Shortly thereafter, Galland was named general of the fighter pilots, after the surprising death of the brilliant bearer Werner Mölders. In this high position, he was primarily responsible for the air force tactics planning, with the first difficult planning - operation "Cerberus" - was his test. Thanks to extremely precise planning and the resulting great success Galland also earned the necessary respect of senior Air Force generals and so he was appointed on 19 November 1942 at the age of only 30 years to the youngest major general of the Air Force. Many good plans to avert the increasingly threatening situation caused by the Allied bombing in 1942-43 failed because of Goering's stubbornness. Thus, the Jagdfliegerkorps lost over 1,000 pilots in just four months, what Galland with the words: "The time has come, in which the collapse of the Jagdfliegercorps seems!" Commented Göring commented. On the 11th
Due to numerous conflicts with Göring Galland was dismissed because of "unüberbrückbarer differences of opinion" as a fighter general and replaced by brilliant wearer Colonel Gordon M. Gollob. Numerous squadron commanders of the Fighter Corps demanded the immediate return of Galland, but they were ignored by higher authorities and the rebel went down in history as a "mutiny of fighter pilots". Lt. Gen. Galland then voluntarily returned to combat, which earned him a great deal of respect and respect from the elite of the Air Force. As many of the association leaders who had fallen out of favor with Goering shared the opinion of Galland, they left their units, training posts, or even came directly from the infirmary and joined the Jagdverband Galland, which was jokingly called the "Season of the Outlaws." In the months of February to April 1945, he flew repeatedly against the enemy and confirmed his 104th victory in the West. During his 705th enemy flight with Spain, however, he was wounded by a shrapnel leg, was in the military hospital until the end of the war and was on 5 May in British captivity. After his dismissal Galland accepted an offer of the Argentine government and worked there in the airplane testing and pilot training, until he returned to Germany in 1955. After the Bundesluftwaffe was founded in Germany, it was looking for suitable candidates for the leadership position, which of course also Adorf Galland counted. After initial hesitation, he accepted, but summarily appointed General Josef Krammhuber to inspect the Luftwaffe and offered Galland only another high staff position, but he refused. He retired successfully to the private industry and assumed a central role as a German military adviser in the creation of the film "Duct of England", but also his book "The First and the Last" became a worldwide success. Adolf Galland died at the age of 83 on February 9, 1996 in Remagen-Oberwinter / Rhineland-Palatinate.